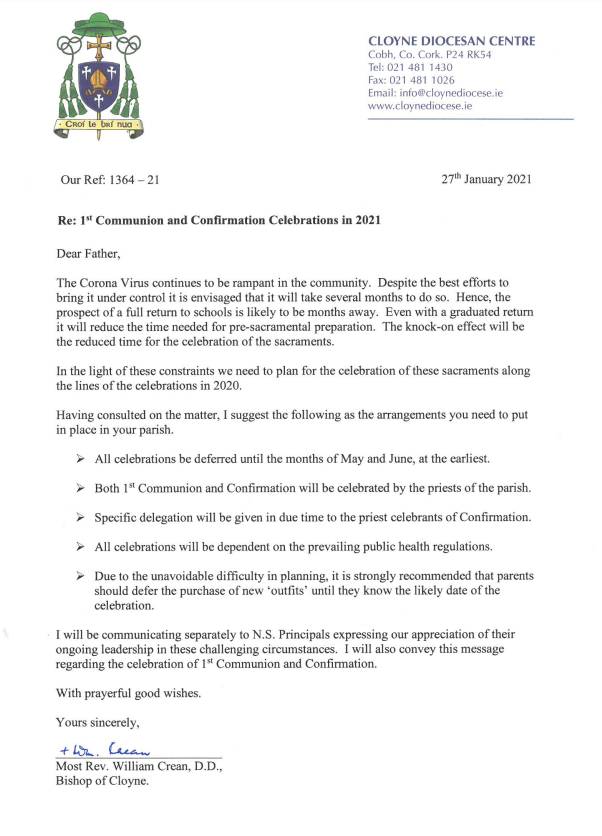 Children will be Confirmed in Groups of 25 per Ceremony and as is mentioned in the letter from the Bishop of Cloyne above, the celebration of the Sacrament of Confirmation will be entirely dependent on the prevailing public health regulations.

The Sacrament of Confirmation

We are made members of God’s family at Baptism. At Confirmation, our Baptism is completed or “sealed” by the Holy Spirit and we are called to be Christian witnesses, just like the apostles. The whole of our Christian living and the life of the Church, too, are sustained by the same Spirit.

Who can receive the Sacrament of Confirmation?

Any baptised Catholic wishing to advance on the path of developing their faith. For young people, this is usually part of the 5th/6th class primary school programme. For adults who were not confirmed as children, it means taking part in the Rite of the Christian Initiation of Adults (R.C.I.A.)

A sponsor stands behind the candidate for Confirmation at the Confirmation ceremony and places their hand on the shoulder of the candidate as a sign that they will support them in living out their baptismal promises. However, the role of the sponsor is not just for one day. The sponsor undertakes to assist the confirmed person in growing in the fullness of their faith and in their membership of the Catholic Church. A person qualifies as a sponsor by being a reasonably mature adult, who is at least 16 years old, and has already received the Sacraments of Initiation, (Baptism, Confirmation and Eucharist) themselves. The Confirmation sponsor may be one of the people who was a sponsor at Baptism (subject to the notes here).

(Ref. Code of Canon Law §874) To be admitted to undertake the office of sponsor, a person must be appointed by the candidate, or by the parents or whoever stands in their place, or failing these, by the parish priest or the minister. To be appointed the person must be suitable for this role and have the intention of fulfilling it. He or She must be not less than sixteen years of age, unless a different age has been stipulated by the diocesan Bishop, or unless the parish priest or the minister considers that there is a just reason for an exception to be made. The Sponsor must be a Catholic who has been confirmed and has received the blessed Eucharist, and who lives a life of faith which befits the role to be undertaken. He or She must not labour under a canonical penalty, whether imposed or declared and not be either the father or the mother of the candidate.

The tradition of taking a new name at Confirmation emphasises the new identity of a Christian being called to witness to their faith. People are encouraged to take the name of a saint or a person from the Bible who inspires them in some way.

The oil used is called the Oil of Chrism. It is olive oil mixed with balsam that is blessed by the bishop and priests of the diocese in the Cathedral at the ‘Chrism Mass’ on Holy Thursday. The Sacrament is conferred with the anointing with this ‘Oil of Chrism’ on the forehead as the Bishop says ‘Be sealed with the gifts of the Holy Spirit’. 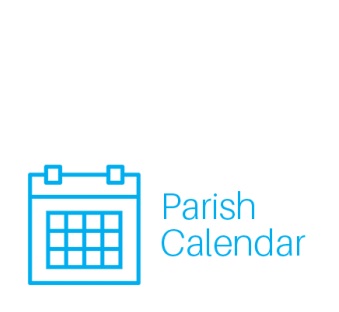 Any cookies that may not be particularly necessary for the website to function and is used specifically to collect user personal data via analytics, ads, other embedded contents are termed as non-necessary cookies. It is mandatory to procure user consent prior to running these cookies on your website.

In light of the recent extraordinary increase in Covid-19 Cases and hospitalisations and in the interests of everyone’s safety, it has been decided that all Public Masses in the Parish of Doneraile are to be cancelled.

Our three Churches will remain open for private prayer daily.

Masses will be streamed online as follows:

In addition, Exposition of the Blessed Sacrament will be streamed live every Tuesday after Mass and Benediction will be given at 12PM.

Admission to the Churches during the live broadcasting of Mass is strictly Prohibited except for those directly involved with the liturgy in accordance with Government Guidelines. We would ask all parishioners to respect this regulation, which, after all, has been put in place for the protection of our health and well-being. The health and safety of our community and especially the most vulnerable is my first priority.

With every good wish & blessing,